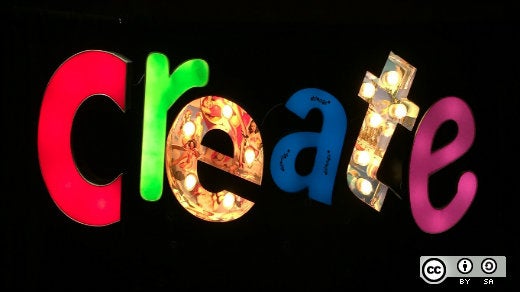 When the holidays roll around each year, you'll encounter some wonderful gift-giving guides for physical gifts. But how about intangible gifts? Some of the most meaningful gifts are intangible ones. Let me plant some ideas in your head in that regard, and explain how intangible gifts fit in perfectly with the open source way.

Growing up, my parents established an ethic for our family: "We fix things, build things, and take agency upon the world," became our family's motto. My dad, a trained pharmacist and the chief medical supply officer for UNICEF, would routinely do carpentry, car maintenance, plumbing, and electrical work at our house. My dad once used a paper clip to fix his broken-down VW car, stalled in heavy Parisian traffic in 1952.

Mom, she could sew anything, whip up a great meal with leftovers, and exercise her creativity in a thousand other ways. I loved watching my parents' resolve when they decided to undertake a project. They would literally chortle as they rolled up their sleeves, figuring out what they needed to do first, second, and third.

In the vein of do-it-yourself, back in 2005, when I was unemployed, I wanted to send a birthday gift to my niece, turning seven. Without funds to buy her a gift, I sat down and composed When I Was Seven. She adored receiving this gift and remembers it fondly seventeen years later. What could be more valuable than a gift that is remembered fondly seventeen years later? Incidentally, the graphics in this YouTube video were created using LibreOffice Draw. (Back then, LibreOffice was called OpenOffice.)

Did you know that wondering can be a gift? I work at a public library, so I know all about the value of wondering. You too can bump up the wonderings in your life—and pass along that wondering as an intangible gift in the conversations you have with others. For example, this past week I've been wondering where would be a good location to set up a large, rural makerspace. Some YouTube videos about wood-powered trucks, cars, and bicycles got my synapses thinking. Wood is a renewable resource. Maybe we ought be using it more.

"Hmmmm," I thought to myself. "What's the most forested state in the United States?" I recall that 90 percent of Maine is covered in forests. So I did a web search for how many trees there are in Maine. I was prepared to encounter a large number—such as 5 or 10 million. I wasn't prepared to encounter the actual number—23 billion.

So with 23 billion trees, you could have a large, rural makerspace powered by wood-powered gasifiers, along with solar, wind and micro-hydro power (as long as the property has a fast-flowing stream or river on it.) People traveling to such a place could have their electrical vehicles recharged at the makerspace, reducing their travel costs. Trees are a renewable resource, and if used wisely (not wastefully) could provide heating, cooking, and electrical power to a rural makerspace. People could learn all about sustainability at this rural makerspace, too.

As you can see, wondering takes your mind places. My wonderings allowed me to be one of the first persons in the world to see the bicycle treehouse elevator, in Idaho, back in August, 2013. I was also one of the first to see the trivia vending machine (Raspberry Pi powered), originating from Southern Methodist University and the Dallas Makerspace.

Wondering is contagious. At your family's dinner table, make it a practice to use the phrase, "I was wondering..." That's an intangible gift you can give others. Wonder together with friends, too. Back in 2007, I got together with some friends to create a spoof YouTube video—which was chosen as a YouTube Editor's Choice and featured on the front page of YouTube. This particular video was created using proprietary software, but I knew in 2007 that similar videos could be created using open source software in coming years. Today, I'd be using OpenShot, Blender, KDEnlive to create this video.

In terms of intangible gifts you give others, find fun small projects where you're exploring something that nobody in the world has ever done before. Before the pandemic, I decided to upload an 8K digital storytelling video to YouTube, created using LibreOffice Draw. Of the 8 billion people living on planet Earth, there's (roughly speaking) one person using LibreOffice Draw to create 8K videos on YouTube. That would be me. And, in the process of doing so, I teach others how they can do so, too.

Let me leave you with one last thought. Open source is not only a software creation method, it is an approach to living one's life. I find it an enriching way to live one's life—and this enrichment can be given to others.

Give that gift, in multiple ways, to loved ones in your life. Do it for the holidays and maybe the process will become a family habit. A year-round family habit. Spread it around the neighborhood. See what happens.

7 maker gifts for kids and teens

Make your holiday gift shopping easy with this guide to gifts sure to spark creativity and innovation in babies, kids, tweens, teens, and beyond.

Phil Shapiro has been an educator, teaching students from pre-school to graduate school for the past 35 years. He currently works at a public library in the Washington, DC area, helping youth and adults use 27 Linux stations.
More about me