Sticky situation: The serious business of stickers in open source 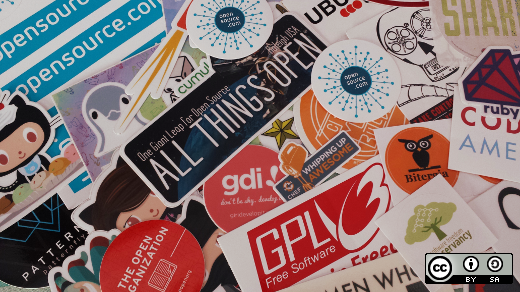 While I was looking at the collection of stickers on the All Things Open 2015 sticker table, I complimented event organizer Todd Lewis, who was standing nearby, on the conference stickers. 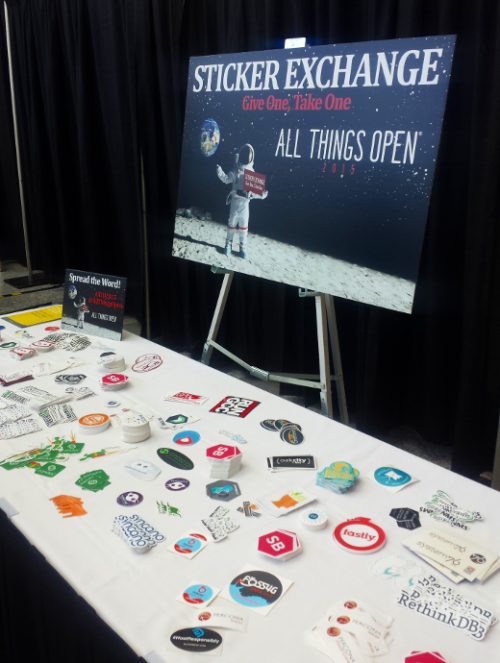 Todd said he wasn't sure that he'd ordered the right shape. The All Things Open stickers are 5 inches wide by 2 inches tall. He said that somebody told him that he should have stacked the text and made the stickers smaller. "I don't know," he said, as we looked over the table of stickers. "There's no article for this."

Challenge accepted, Todd. This is that article.

Stickers are a big part of open source culture, but what are the rules for designing and collecting them? In this article, open source community members share what they like (or don't like) in a sticker, their "rules" for collecting and displaying them, and their sticker wish lists.

Skip ahead to the sticky parts: 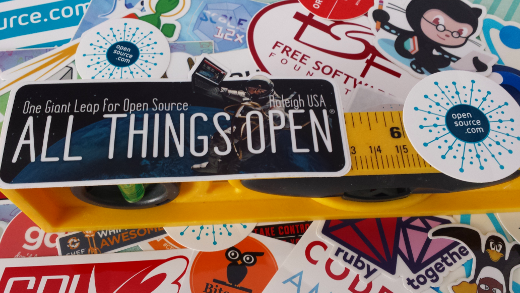 The first time I ordered open source-related stickers was after attending LinuxFest Northwest in 2009. A young girl attending the event with her father chatted with me at the Linux Pro Magazine booth and suggested that we hand out stickers. Although I'd been working in tech publishing for more than a decade by the time a 12-year-old called me out for not having stickers, I hadn't given stickers much thought, and I hadn't recognized the roles they play in open source culture.

As I recall, the Linux Pro Magazine stickers I ordered were 5 inches wide and 3 inches tall. Occasionally someone would request that I order smaller stickers, but I liked that I could see our stickers on a speaker's laptop from across a conference room. And I was happy with the service and quality I got from Sticker Giant. That was a lucky break—I knew bands that ordered stickers from there, otherwise I wouldn't have known where to start. I'm pretty sure that the Fedora sticker I picked up at a conference a few years ago and accidentally left in a pocket when I did laundry was from the same vendor, and that thing stuck to the inside of my dryer—without fading—for at least two years. (For all I know, it's still in a dryer back in Kansas.)

I won't cover which vendors to use when ordering stickers, but feel free to make your recommendations in the comments. Instead, let's look a little closer at what open source community members want in a sticker, why they like them, and how they are used, which is helpful information when you think about design and what shapes, sizes, and quantities to order.

"I am in a company that is new to OS [open source] and I always get the question, 'Why do you have all these stickers?'" says Nithya Ruff, Head of the Open Source Strategy Office at SanDisk. Nithya says that, to some people, the stickers look unprofessional, and when she worked at a previous company, she was told that they took away from her professional gravitas. "I now explain that I am a member of the open source community," she says, "And as such, this is how we show affiliation and respect, and I am proud to do it." 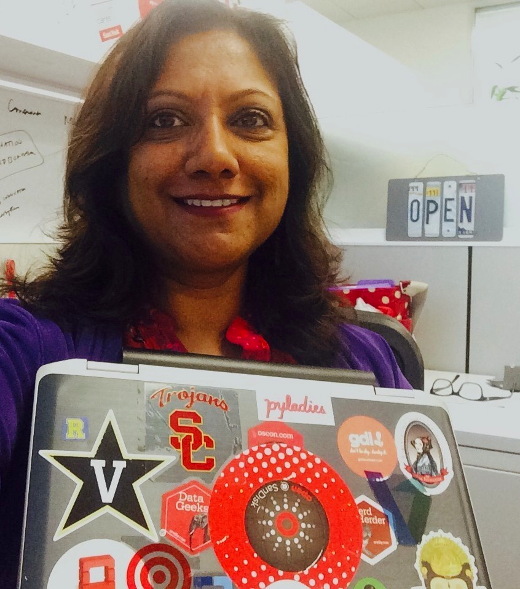 "I love a sticker that identifies itself as open source, or being for Linux, or similar," says Opensource.com community moderator Seth Kenlon. "I would rather people see and understand, at least on some level, that I walk around with 30 stickers on my computer because I'm supporting real people, not just because I am selling my soul to every company that hands me a sticker." 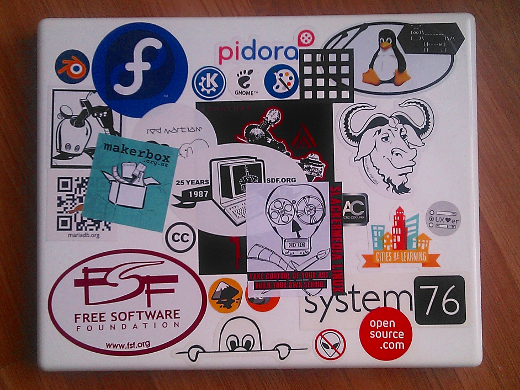 Like other people in open source, Nithya and Seth have their own sets of rules for which stickers make the cut and get stuck on the limited real estate of a laptop. There are the personal stickers, like the ones from the schools Nithya attended and her kids attend. And then there are the open source culture and more practical rules.

In the unofficial Rules of Sticker Club, stickers must do one or more of the following:

Nithya's laptop includes stickers from foundations Sandisk belongs to and projects they support, such as Ceph, OpenStack, and the Linux Foundation. She also likes stickers that show support for women in tech, such as Ada Initiative, PyLadies, and Girl Develop It (GDI).

"I only add stickers to my laptop if I am somehow connected (support/use) to the project behind the sticker," says Opensource.com community moderator Nitish Tiwari. "I recently removed all the stickers from my laptop just because I was bored, but generally I find stickers a good way to show support toward a cause/organization."

For Seth, stickers are about the open source projects and the people. "I am not interested in advertising for companies," he says. "In fact, I frequently use stickers to conceal what brand of computer I have, because if I'm going to be a walking billboard for anything in this crazy brand-crazed world, it's going to be for projects by my friends, who don't have the money to brainwash people with TV ads, but actually do want people to know about and use their software (or listen to their music, or whatever)."

Brian Flannery, Alliances and Ecosystem at NATS.io, says that open source communities are first and foremost about people. "While all of the organizations represented on my laptop are extremely innovative, the people are really important, and my interactions with them is what I most remember and attribute to a particular sticker," he says. 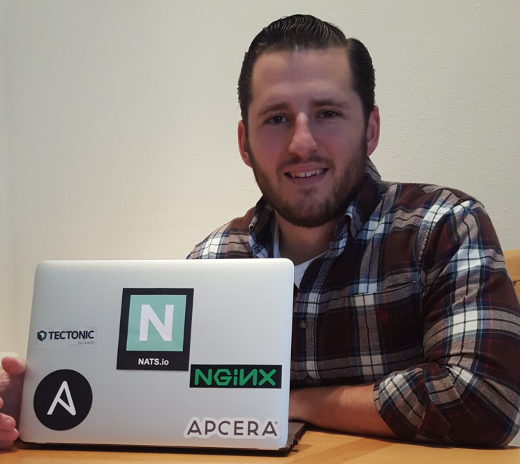 "I like stickers that I've 'earned'," says Opensource.com community moderator Ben Cotton, "So my favorite is probably my SysAdvent contributor sticker. It's a nice reminder that I did something to give back to the community."

Nitish says that stickers he received after contributing to a project or organization—including ones from Taiga, Opensource.com, and Gibbon—are his favorites.

If you like traveling a lot, and don't like collecting desk clutter, think of stickers as the snow globes of tech events. They are a nice little lightweight memento to take home from work-related travel. In addition to collecting stickers from projects he uses and advocates for, Ben Nuttall, education developer advocate for the Raspberry Pi Foundation, likes stickers from conferences he has attended. "I don't mind stickers overlapping, but I try not to cover up too much of any," he says. 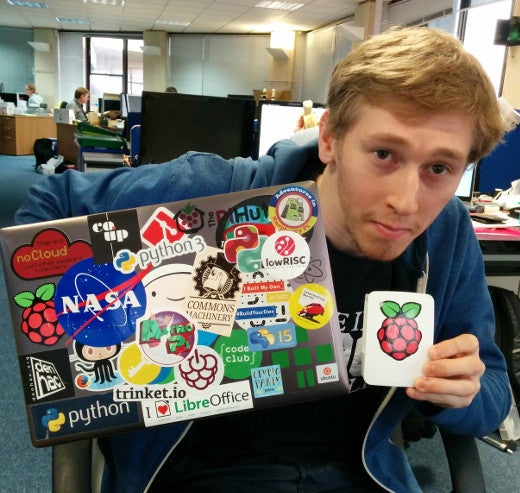 Like Ben, I'm also a fan of conference stickers, but when you travel often, you quickly run out of room on a laptop. That's why the side of my home desk and my suitcase are speckled with stickers now, too.

"My favourite stickers tend to be either Slackware or FSF stickers, because those are two projects that I care about, but they also use iconography that is slightly more obscure than a lot of other projects," Seth says. "I mean, anyone can draw a cute squirrel as their logo, but only the FSF uses a not-particularly cute wildebeest. I guess I tend to like 'ugly' stickers more than non-ugly stickers. But there are exceptions."

"I love the NASA and Astro Pi ones—because who doesn't love space?" Ben Nuttall says. "'There is no cloud, only other people's computers' is a great phrase on the Free Software Foundation Europe sticker."

Nithya loves the popular GitHub stickers. "They are always so creative," she says.

The only exception Seth has to his rule about stickers showing support for open source projects or people is when he uses vendor stickers for a practical purpose, like when he put an AMD sticker on his tower. "But that's not because I'm proud of the part," he explains. "It's purely to help me track what computer is using what, or what kind of repairs any given computer has had done." 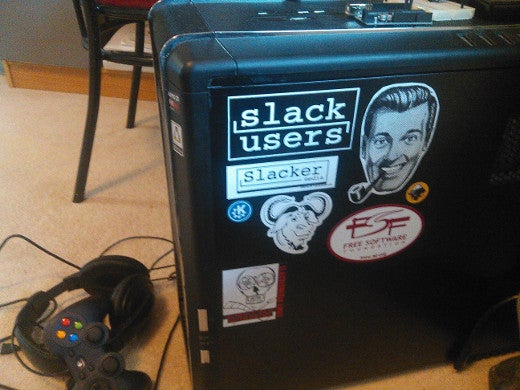 Opensource.com community moderator David Both doesn't put many stickers on his laptop because he's careful about heat. "Heat is the worst enemy of electronic circuitry, including laptop displays," David says. "Stickers are insulators and prevent the proper dissipation of heat. So I have only a few and try to leave plenty of un-stickered real estate on the back of my display."

You can have a lot of stickers, but you can't have them all. For example, I'd like a replacement sticker for the one from Google that's stuck to my old MacBook Pro, which says, "I'm a woman in tech. That doesn't mean everything has to be pink." Like me, the people I interviewed for this story have a sticker wishlist.

Seth says he wants more Slackware stickers. "I'd love a Slax sticker, because I use Slax all the time but have never seen a sticker for it," he says. He's also got Kdenlive and Urxvt on the list. "Some kind of UTF-8/Unicode awareness sticker would be cool," he adds.

Nithya is on the lookout for Docker and Android stickers, and another one from Ceph.

"I would like to collect stickers of all the famous Linux distros," Nitish says. "Right now I only have Ubuntu."

"There are some great GitHub Octodex stickers," Ben Nuttall says. "I have a couple, but there are a few I really wish I had, like the Adventure Time and Portal."

"I don't have any OSI or Software Freedom Conservancy stickers," Ben Cotton says. "I assume they exist somewhere."

How many stickers are on your laptop? I've got two inside by my keyboard (Fedora and Opensource.com), and 20 on the cover. (Take our poll.) 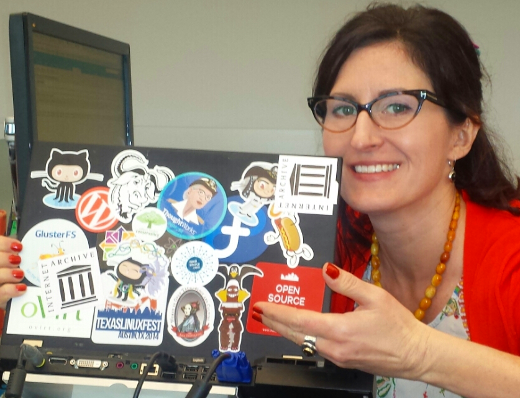 Now that we have a better idea of what people like in their stickers, why, and how they use them, we can create a list of sticker tips for open source projects and events:

What did I leave out of the list of sticker tips for open source projects and events? What are the missing Rules for Sticker Club? Let me know about them in the comments, or tweet your feedback with the hashtag #openstickers.

Let's see your laptop sticker showcase. Share your sticker photos with us on Twitter using the hashtag #openstickers.

Thank you to everyone who contributed to this story, and especially to that girl who told me I needed to order stickers years ago at LinuxFest Northwest. "This is my husband, Ernie Kim, who is using my old netbook. He shares my enthusiasm for most of these projects." Photo by Deb Nicholson. CC BY-SA 4.0Rules of sticker club

What to read next
Rikki Endsley