BASIC was my entry into computer programming. I haven't written BASIC code in years, but I'll always have a fondness for BASIC and GW-BASIC.

When I was growing up, it seemed every "personal computer" from the TRS-80 to the Commodore to the Apple let you write your own programs in the Beginners' All-purpose Symbolic Instruction Code (BASIC) programming language. Our family had a clone of the Apple II called the Franklin ACE 1000, which—as a clone—also ran AppleSoft BASIC. I took to AppleSoft BASIC right away and read books and magazines to teach myself about BASIC programming.

Later, our family upgraded to an IBM PC running DOS. Just like every personal computer before it, the IBM PC also ran its own version of DOS, called BASICA. Later versions of DOS replaced BASIC with an updated interpreter called GW-BASIC.

BASIC was my entry into computer programming. As I grew up, I learned other programming languages. I haven't written BASIC code in years, but I'll always have a fondness for BASIC and GW-BASIC.

In May 2020, Microsoft surprised everyone (including me) by releasing the source code to GW-BASIC. Rich Turner (Microsoft) wrote in the announcement on the Microsoft Developer Blog:

Since re-open-sourcing MS-DOS 1.25 & 2.0 on GitHub last year, we’ve received numerous requests to also open-source Microsoft BASIC. Well, here we are! As clearly stated in the repo's readme, these sources are the 8088 assembly language sources from 10th Feb 1983 and are being open-sourced for historical reference and educational purposes. This means we will not be accepting PRs (Pull Requests) that modify the source in any way.

You can find the GW-BASIC source code release at the GW-BASIC GitHub. And yes, Microsoft used the MIT License, which makes this open source software.

Unfortunately, the GW-BASIC code was entirely in Assembly, which wouldn't build with modern tools. But open source developers got to work on that and adjusted the code to assemble with updated DOS assemblers. One project is TK Chia's GitHub project to update GW-BASIC to assemble with JWASM or other assemblers. You can find several source and binary releases on TK Chia's project. The notes from the latest version (October 2020) mention that this is a 'pre-release' binary of GW-BASIC as rebuilt in 2020 and that support for serial port I/O is missing. Light pen input, joystick input, and printer (parallel port) output need more testing.  But if you don't need those extra features in GW-BASIC, you should be able to use this latest release to get back into BASIC programming with an open-sourced GW-BASIC.

FreeDOS 1.3 RC4 doesn't include GW-BASIC, but installing it is pretty easy. Just download the gwbas-20201025.zip archive file from TK Chia's October 2020 GW-BASIC release, and extract it (unzip it) on your FreeDOS system. The binary archive uses a default path of \DEVEL\GWBASIC.

To start GW-BASIC, run the GWBASIC.EXE program from the DOS command line. Note that DOS is case insensitive so you don't actually need to type that in all uppercase letters. Also, DOS will run any EXE or COM or BAT programs automatically, so you don't need to provide the extension, either. Go into the \DEVEL\GWBASIC and type GWBASIC to run BASIC. 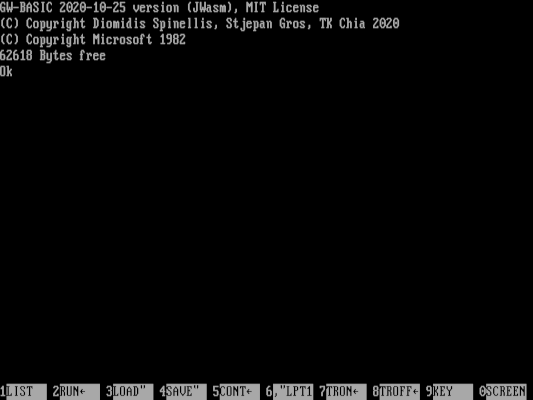 GW-BASIC is an interpreted programming language. The GW-BASIC environment is a "shell" that parses each line in your BASIC program as it runs the code. This is a little slower than compiled languages like C but makes for an easier coding-debugging cycle. You can test your code as you go, just by entering it into the interpreter.

New to GW-BASIC? You can learn about the programming language by reading an online GW-BASIC reference. Microsoft didn't release a programming guide with the GW-BASIC source code, but you can search for one. Here's one reference that seems to be a copy of the original Microsoft GW-BASIC User's Guide.

Let's start with a simple program to print out a list of random numbers. The FOR statement creates a loop over a range of numbers, and RND(1) prints a random value between 0 and 1. 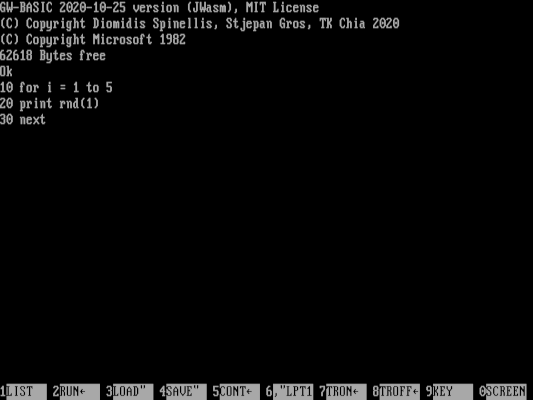 Do you see those highlighted words at the bottom of the screen? Those are keyboard shortcuts that you can access using the "F" keys (or function keys) on your keyboard. For example, F1 will insert the word LIST into the GW-BASIC interpreter. The "left arrow" indicates that the shortcut will hit Enter for you, so F2 will enter the RUN command and immediately execute it. Let's run the program a few times to see what happens. 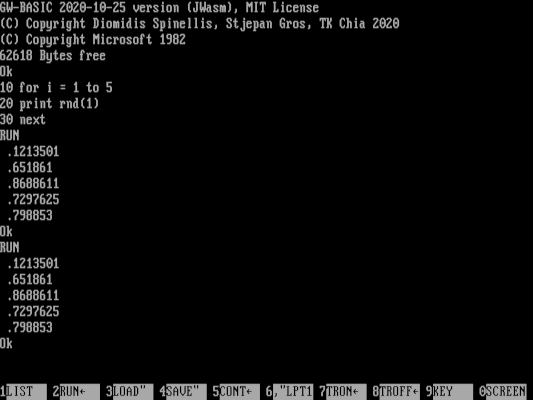 The two lists of random numbers are the same

To generate new random numbers every time, we need to "seed" the random number generator with a value. One way to do this is by prompting the user to enter their own seed, then use that value with the RANDOMIZE instruction. We can insert those two statements at the top of the program using line numbers 1 and 2. GW-BASIC will automatically add those statements before line 10. 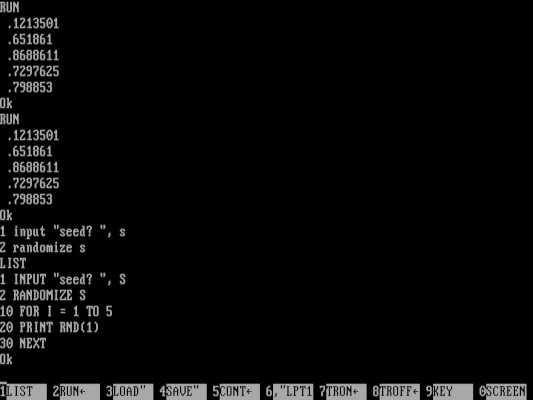 With the random number generator using a new seed, we get a different list of random numbers every time we run our program. 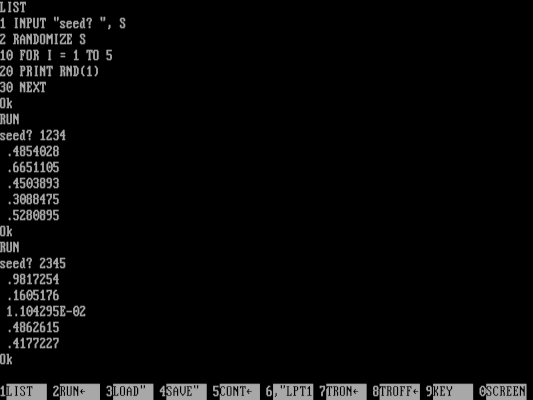 Now the lists of random numbers are different

"Guess the number" game in GW-BASIC

Whenever I start learning a new programming language, I focus on defining variables, writing a statement, and evaluating expressions. Once I have a general understanding of those concepts, I can usually figure out the rest on my own. Most programming languages have some similarities, so once you know one programming language, learning the next one is a matter of figuring out the unique details and recognizing the differences.

To help me practice a new programming language, I like to write a few test programs. One sample program I often write is a simple "guess the number" game, where the computer picks a number between one and 100 and asks me to guess it. The program loops until I guess correctly.

Let's write a version of this "guess the number" game in GW-BASIC. To start, enter the NEW instruction to tell GW-BASIC to forget the previous program and start a new one.

My "guess the number" program first prompts the user to enter a random number seed, then generates a random number between 1 and 100. The RND(1) function actually generates a random value between 0 and 1 (actually 0.9999…) so I first multiply RND(1) by 100 to get a value between 0 and 99.9999…, then I turn that into an integer (remove everything after the decimal point). Adding 1 gives a number that's between 1 and 100.

The program then enters a simple loop where it prompts the user for a guess. If the guess is too low or too high, the program lets the user know to adjust their guess. The loop continues as long as the user's guess is not the same as the random number picked earlier. 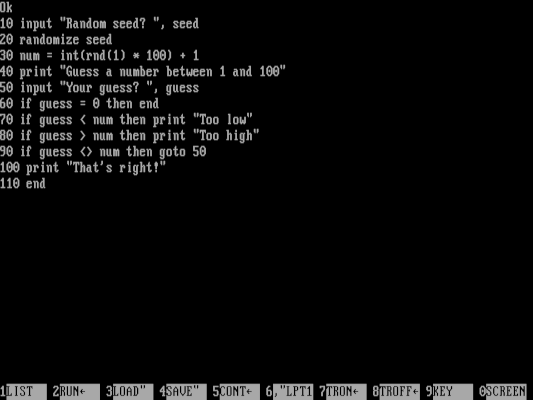 Entering a "guess the number" program

We can run the program by tapping the F2 key. Using a random seed of 1234 generates a completely new random number. It took me six guesses to figure out the secret number was 49. 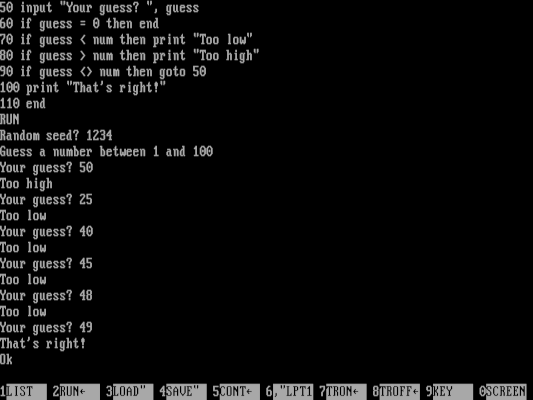 And that's your first introduction to GW-BASIC programming! Thanks to Microsoft for releasing this great piece of history as open source software, and thanks also to the many open source developers who assembled GW-BASIC so we can run it.

One more thing before I go—It's not obvious how to exit GW-BASIC. The interpreter had a special instruction for that—to quit, enter SYSTEM and GW-BASIC will exit back to DOS. 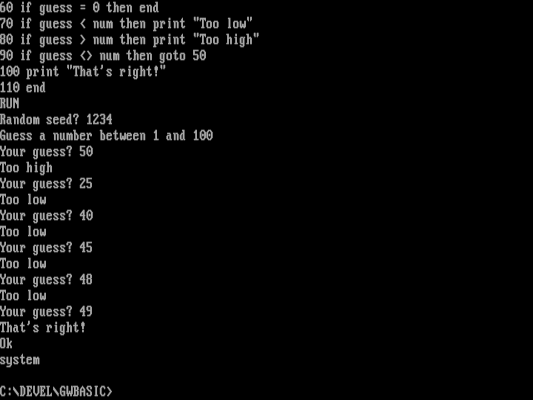 Why does text only come in this limited palette, and why does FreeDOS use those colors and shades, instead of some other colors? The answer, like many things in technology, is…

Edlin is a joy to use when I want to edit text the "old school" way.