Listen to music with Mplayer

Mplayer is an open source media player that's usually found on Linux, Windows, and Mac—but there's a DOS version available, too. And that's the version we include in FreeDOS. While the DOS port is based on an older version (version 1.0rc2-3-3-2 from 2007) it is perfectly serviceable for playing media on DOS.

I use Mplayer to listen to music files on FreeDOS. For this example, I've copied one of my favorite audiobooks, Doctor Who: Flashpoint by Big Finish Productions, and saved it as C:\MUSIC\FLASHPNT.MP3 on my FreeDOS computer. To listen to Flashpoint on FreeDOS, I launch Mplayer from the FreeDOS command line and specify the MP3 filename to play. The basic usage of Mplayer is mplayer [options] filename so if the default settings work well for you, then you can just launch Mplayer with the filename. In this case, I ran these commands to change my working directory to \MUSIC and then run Mplayer with my MP3 audiobook file:

FreeDOS is case insensitive, so it will accept uppercase or lowercase letters for DOS commands and any files or directories. You could also type cd \music or Cd \Music to move into the Music directory, and that would work the same. 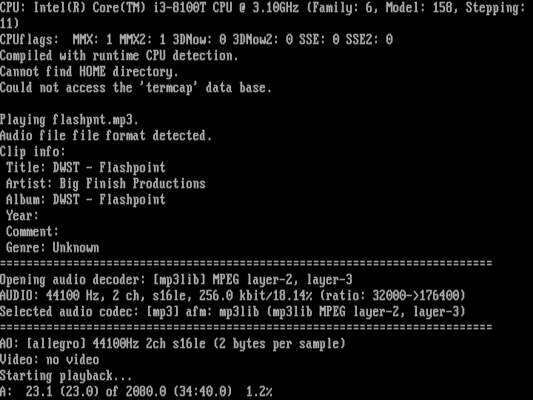 You can use Mplayer to listen to MP3 files

Using Mplayer is a "no frills" way to listen to music files on FreeDOS. But at the same time, it's not distracting, so I can leave FreeDOS to play the MP3 file on my DOS computer while I use my other computer to do something else. However, FreeDOS runs tasks one at a time (in other words, DOS is a "single-tasking" operating system) so I cannot run Mplayer in the "background" on FreeDOS while I work on something else on the same FreeDOS computer.

Note that Mplayer is a big program that requires a lot of memory to run. While DOS itself doesn't require much RAM to operate, I recommend at least 16 megabytes of memory to run Mplayer.

FreeDOS offers more than just Mplayer for playing media. We also include the Open Cubic Player, which supports a variety of file formats including Midi and WAV files.

In 1999, I recorded a short audio file of me saying, "Hello, this is Jim Hall, and I pronounce 'FreeDOS' as FreeDOS." This was meant as a joke, riffing off of a similar audio file (english.au, included in the Linux source code tree in 1994) recorded by Linus Torvalds to demonstrate how he pronounces "Linux." We don't distribute the FreeDOS audio clip in FreeDOS itself, but you are welcome to download it from our Silly Sounds directory, found in the FreeDOS files archive at Ibiblio.

Instead, FreeDOS provides another open source 32-bit extender called DOS/32A. If you did not install everything when you installed FreeDOS, you may need to install it using FDIMPLES. I used these two commands to move into the \APPS\OPENCP directory, and to run Open Cubic Player using the DOS/32A extender:

Open Cubic Player doesn't sport a fancy user interface, but you can use the arrow keys to navigate the File Selector to the directory that contains the media file you want to play. 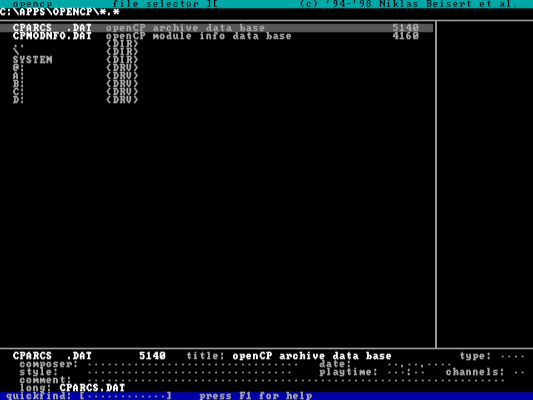 When you have selected your media file, Open Cubic Player will play it in a loop. (Press the Esc key on your keyboard to quit.) As the file plays over the speakers, Open Cubic Player displays a spectrum analyzer so you can see the audio for the left and right channels. The FreeDOS audio clip is recorded in mono, so the left and right channels are the same. 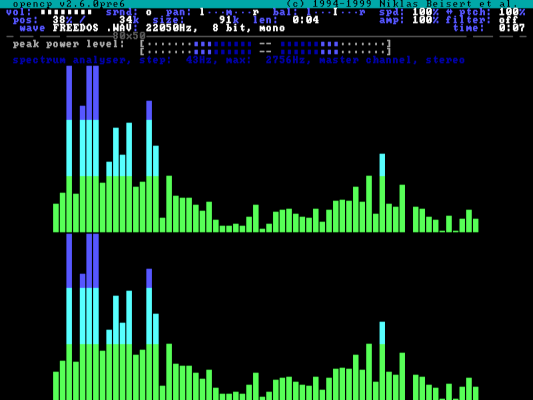 DOS may be from an older era, but that doesn't mean you can't use FreeDOS to run modern tasks or play current media. If you like to listen to digital music, try using Open Cubic Player or Mplayer on FreeDOS.