10 reasons to use Flowblade on Linux as your video editor

The software racket is like anything else: there are loud projects that get a lot of attention but don't actually get much done, there are heavyweights that move in and make sure things get done, and there are the quiet ones that work with their head down, diligently, only to turn up at the finish line with a work of art. In this analogy, Kdenlive is my personal heavyweight, but Flowblade has lingered in the background, developing and improving into a surprisingly effective and efficient video editor for Linux.

So why use Flowblade over other options? I have several good reasons; here are ten of them. 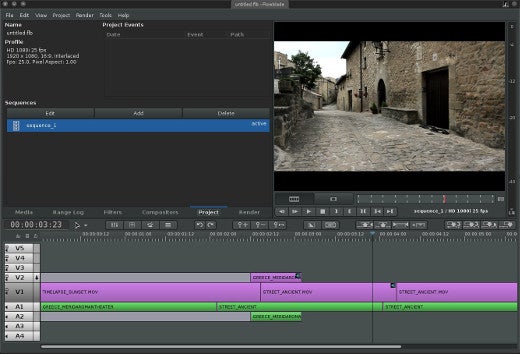 Flowblade is a surprisingly lightweight application, which isn't a common trait among video editing applications. Of course, saying this about a Linux application can be deceptive, because Flowblade itself is essentially a front-end for MLT and FFmpeg, but complexity under the hood and file sizes aside, Flowblade is designed for cutting video. It doesn't have twenty extra features that only apply to video peripherally.

The features it does have are a laundry list of all the common must-have requests from working editors; there are all the usual video cutting tasks, a full set of visual effects, some basic audio effects with keyframing, and exporting. That's it. Just everything you need, without any of the extra bells and whistles to get in your way. 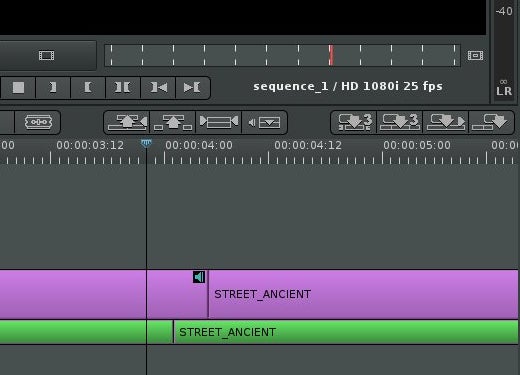 Video editors are famously complex, so how can an application that can fit all of its functionality in a single row of buttons claim to be a serious editor? Quite effectively, as it turns out; all of Flowblade's primary functionality does indeed fit in about ten buttons in the middle button bar of the interface. Additional buttons are present for some detail work (zooming in and out, undo and redo) but most of the application fits in one horizontal toolbar.

Better yet, all the major functions are assigned to keyboard shortcuts, so once you get into the swing of things, the editing process becomes fluid, and even graceful. Even if you've never used Flowblade before, you'll fly through hours of footage and end up with a rough assembly in next to no time, making it easily one of the simplest editors I've used. 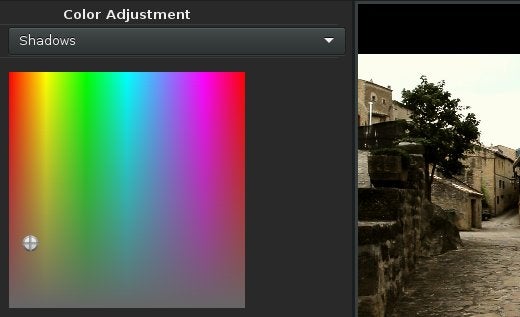 Flowblade benefits from the same set of video effects that nearly every Linux video editor has: the Frei0r. What that means is that you inherit a bunch of great video effects that are already written and ready to use, plus you get the great front-end user interface (UI) that Flowblade's developer provides you.

When I first wrote about Flowblade in the Linux Format magazine a few years ago, its effects UI was backwards. Literally. The UI of the colour correction, for instance, worked in reverse. But that's been overhauled now and the UI is one of the best front-ends for Frei0r effects that I've seen. The effects are intuitive, stack-able, and they look great.

But wait, that's not all.

Lately, Flowblade has even integrated the G'MIC filters, made popular by GIMP but so rich in features that it's really an application in itself.

In other words, you have plenty to choose from. 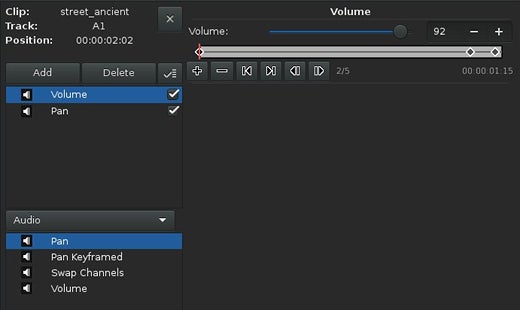 Flowblade provides. It's got the obvious volume mixer, plus a few extras, like panning and even swapping channels. Even better, it's got the easiest and most comfortable keyframing system I've seen in a Linux editor so far. I imagine even if you've never keyframed anything before in your life, you could probably figure this one out; add a keyframe, set your volume, add another keyframe, set your new volume. It's simple, it's intuitive, and it's effective. You hear the changes immediately, it plays back smoothly, it's exactly what a smash-and-grab video editor wants. 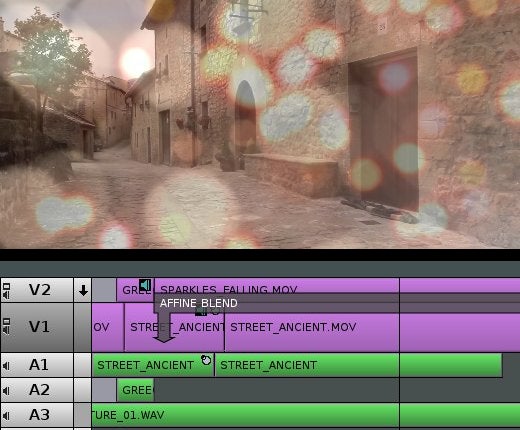 Flowblade has consistently amazed me at the smoothness of its playback. Admittedly, MLT has improved and my computer has gotten a better graphics card, but Flowblade has crunched through my video in ways it just doesn't seem a lightweight editor has any business doing. It's by no means magick, and I wouldn't bet the farm on smooth playback under all conditions, but from the viewpoint of living in a video editor for days at a time, I can say comfortably that Flowblade performs well under the typical "Let's throw this effect on the footage for now, and see what happens" workload. Sure, if I pile on too many effects then I have to create a temporary render of a clip to properly audition the effect, but for quick reference, it does great.

Eventually, any working editor has to decide how they want their application to deal with realtime effects. So far Linux editing apps mostly leave it to the user, which is good because that means that you can use Flowblade on a five-year-old laptop, or on the latest and greatest custom-built desktop. The payoff to that flexibility is that you get to manage your own previews. But if you're too much in the flow of editing to be bothered, you can at least rest assured that Flowblade will do its best to keep up with all your crazy ideas. 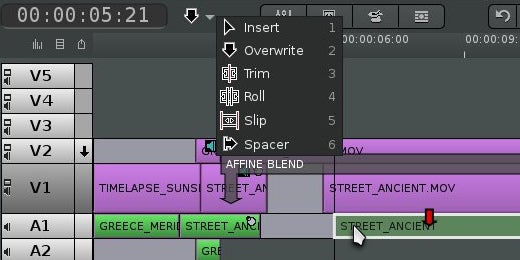 The film school I attended forced its first year students to work in Super 8 film. We had to shoot, develop, and hand-cut celluloid, using wax pencils to mark our in and out points and cello tape to join our splices. A side effect of this training was that most of us learnt to be pretty adaptable in what tools we could use to cut footage together. It's akin to learning to drive a stick shift.

Cutting to the chase (so to speak), Flowblade is both a traditional film-style editor as well as a friendly drag-and-drop video scratchpad. By that, I mean if you're an editor who thinks in Timecode (or SMPTE) and A-and-B (a style of conceptualizing editing), and sees video as just a visual reference to your EDL (edit decision list), then Flowblade accommodates. But if you're more a visual person who likes to get down in the timeline and click and drag clips around, Flowblade lets you do that, too.

Flowblade uses the float: left rule that's become popular in editing applications lately, so when you add a clip it defaults to snapping to the clip to its left. But by using the Overwrite cursor, you can un-float a clip and move it anywhere in the timeline you please. Gray matter filler is placed between your clip and whatever is to its left in order to mimic a sort of celluloid base layer. 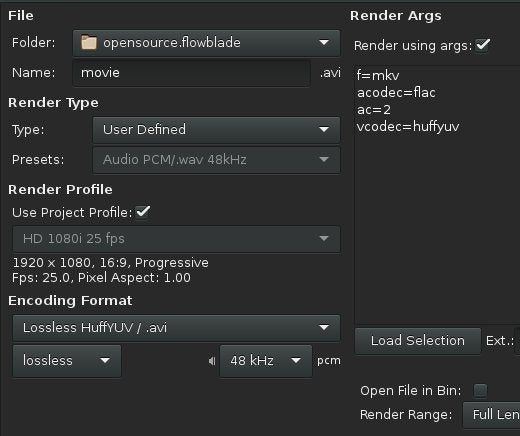 Since Flowblade uses FFmpeg and MLT as its foundation technologies, there are plenty of options when it comes to delivering your work. You can use the inbuilt render UI, which makes the process pretty innocuous; it defaults to match most of your project settings, so at worst you'll end up with something that's appropriate. If you prefer to override some settings, there's a panel right in the UI for that.

Better still, you can forego the inbuilt UI and render from the command line using the MLT back-end, so if you need to farm rendering out, you have the freedom to do that. 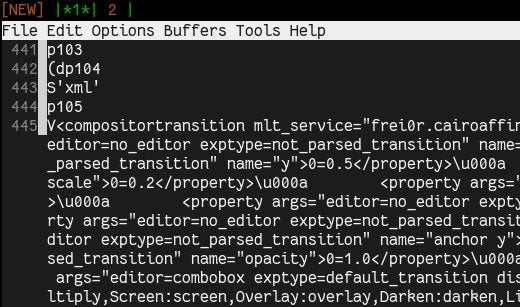 Flowblade protects your art. By using common MLT formatting, open standards, and open source, you never have to lose an edit again. A project you edit today will be available to you for years to come, and will be portable no matter what. I'm not saying you can open Flowblade projects as an afterthought in any other editor as if all open source video applications talk exactly the same language, but I am saying that it's transparent in how it works, so there's no reverse-engineering or hastily-prepared aftermarket conversion tools that you'll need five years in the future. You own your data, and you own the application that helped you make it. And that, sadly, is a unique thing in modern art technology. 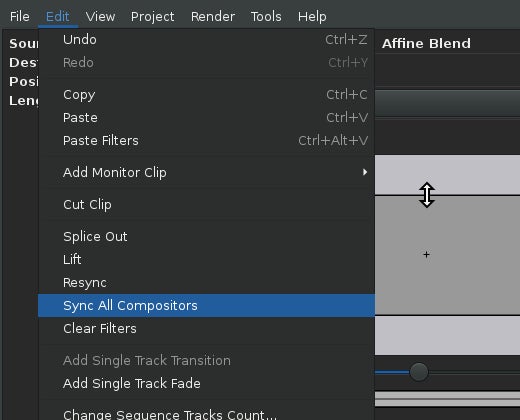 Did I mention Flowblade was fast? It's not that Flowblade does anything too differently from any other video editor, it's just that it doesn't do anything extra that ends up slowing it down. It's a responsive application, and a pleasure to use.

And it's not just fast in normal operation, it has lots of hidden little convenience features that you don't even think to look for until you need it. Little touches like Sync All Compositors, which auto-adjusts the length of composite effects with their parent clips, proxy management for when your video is just too big to be fast, media re-linking, and so much more, as if it's geared to make sure you spend less time fiddling with the editing application and more time editing. At the same time, it makes sure the application isn't wasting your time adjusting UI elements until you decide it's necessary. 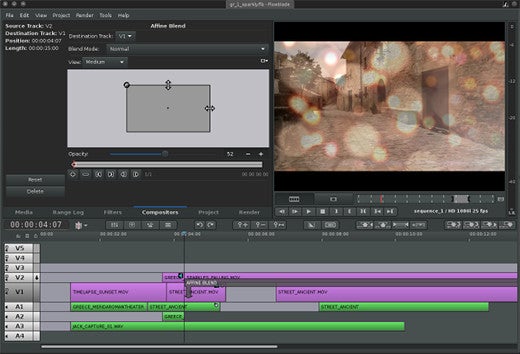 OK, OK, it's Murphy's Law that when you need an application to not crash, it will crash, but Flowblade (running on Slackware, at least) is a stable application. Look through its bug reports on Github and you'll see crashes, you'll see glitches, but my measure of stability is a little less granular. Stability is sometimes more a feeling and it's measured in how much dread you feel when your finger is hovering over the icon to launch the application, or before recommending it to a friend or co-worker when they ask "Say, what's a good video editor for Linux?"

So, for the record: I launch Flowblade with confidence, I enjoy my time in it, and I heartily recommend it to friends. Including, dear reader, you.