With more kids learning from home this year, it's important to engage them with unique learning opportunities. The classroom looks very different than it did before, and it's going to continue to evolve. So should the lessons we teach.

In the first article in this series, I shared how my students taught me to code. Over the next few weeks, I will be exploring how educators and parents can harness the power of coding to teach kids a wide variety of skills.

"But I don't know anything about coding!" you may be shouting at your computer. That's one of the beauties of open source code: everyone is a learner, and everyone is a teacher. Whether you're new to coding or you've been doing it all your life, part of the process is making mistakes. It's all about problem-solving and learning how to find information. The greatest tool an educator has in a coding classroom is the phrase, "I don't know; let's find out together!"

Code is how you get a computer to do what you want it to do. Laptops, smartphones, video-game consoles, and even washing machines use code to work. And despite advancements in machine learning and AI, somebody has to write that code.

Programming and development
Coders (also known as programmers) are the people who write code. But what is code, really? What exactly are programmers writing when they create software or fine-tune hardware?

Code is made up of algorithms: highly structured and ordered lists of instructions, much like a recipe. Because computers aren't actually smart, these instructions are written in code that must be parsed and compiled and transformed into machine language. Only then can computers perform the actions that programmers dictate. The key is to learn the syntax of the code so you can write words in the required order so that computers can decipher and process them.

Scratch is a great platform for kids learning to code. It is a visual programming language designed for ages 8 and up. It uses drag-and-drop blocks that snap together to create animations, quizzes, and video games. Traditional coding requires a lot of typing without making any spelling errors, and the visual nature of Scratch makes it easy for young writers to learn to code without getting bogged down with spelling errors.

Scratch is not just about coding, though. It also encourages an open online community by empowering users to share and remix projects. There's also an offline version available for classrooms and households with limited internet connectivity.

Even if a child has used Scratch before, this lesson is important for ensuring they understand coding terminology and logic. 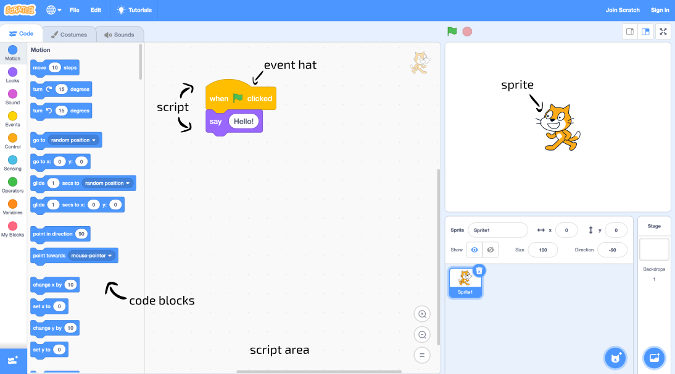 Using Scratch, you can create video games using code blocks that snap together to form a script. A script is an ordered list of instructions, like a recipe. Another word for "script" is algorithm.

A sprite is a character or object in the game. The stage is the background of the game. Scripts can be used to control sprites and the stage.

Every script starts with a special code block called an event hat. These blocks have rounded tops. An event hat waits for something to happen before running all the code blocks underneath it.

Scratch follows scripts exactly, so you must be specific when telling it what to do.

Try the following challenges to get started on your coding journey.

Challenge #1: Create a simple algorithm to move a sprite right when you press the right arrow key.

Did your algorithm work as you expected? Does your sprite move right when the right arrow is pressed? How did you do it?

When coding, there are often multiple solutions to a problem. Here are two of the most common ways you may have coded the sprite to move when the right arrow is pressed:

Now what happens? How can you solve it?

To stop the sprite from flipping upside-down after hitting an edge: select the sprite and click Direction. Select the Left/Right icon or the Do Not Rotate icon. 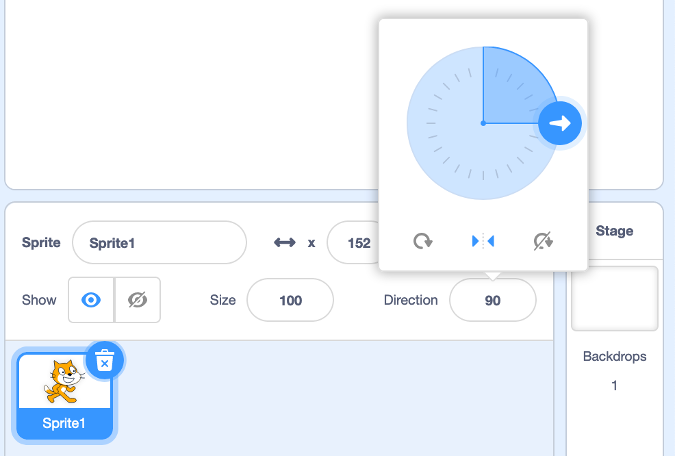 Errors in code, such as this, are called bugs. Bugs are a normal part of coding.

Test your game again. Do you notice any more bugs?

Challenge #2: Make the sprite move left when you press the left arrow.

You have all the skills and knowledge you need to ace this challenge! How will you complete it?

If you're using a screen reader, or you prefer text, select this spoiler text to reveal the answer:

When you're happy with what you've made, name and save your project. Do not select "save as" or "save a copy," as this will create a duplicate project. Just click Save or Save Now.

Coding is all about experimenting and iterating until you get the desired result. This is one of many reasons I love it as a teaching tool. And don't stop with just this introductory lesson.

Pose a problem and try to solve it with Scratch. For instance, can you make a game in which the Scratch cat finds an object and "eats" it? Look through the available blocks and formulate a plan, then construct a script.

Most importantly, don't give up, and remember, there's no wrong answer! It's all about creativity, being inventive, and having fun.

Coding is for everyone—from preschoolers to adults. Here are some ways to help you and your children learn to code.
Jess Weichler

No matter where you are in your programming journey, there are things for you to learn in Opensource.com's top 12 programming articles from 2019.
Erik O'Shaughnessy

Open source tools can help anyone get started learning Python in an easy and fun way—making games.
Moshe Zadka (Correspondent)

Really Scratch is an ideal tool for teaching kids how to code in this tech era. All the material is free and there are many resources to help teachers integrate coding with their curriculum. I loved it.

Thanks for reading, Kamlesh. I completely agree. The Scratch team really has created a wonderful and engaging community for learners and educators.

Great intro for an absolute beginner -- introduce basic terms, dive into problem solving and experimentation. My daughter loved Scratch when she was younger. The ability to view the code for others' projects and make your own variants (remixes) is very cool.

That's so great to hear. Is your daughter still coding, if so what is she coding in now?

Great article, I will be sharing this one with my daughter. Thanks!

Thanks! I'm glad you found it helpful and hope your daughter has fun coding!

Imagine where my young son sitting at the keyboard of an Apple IIgs would be today if he had this tool all those years ago. ;-) Seriously, this is the best intro I've ever encountered to what would have been a very intimidating topic just a few years ago. Let me encourage you to make these workshop worthy articles a regular feature of your writing.

ah the ][gs, I also had a ][c ... great times!
No scratch in those days. Lucky for me my school happened to have a 6502 assembler book I could use to crash my ][c out of basic and hand enter assembly opcodes for some real fun.

The did have a reasonable Logo back then that was also fun to play with.