Whether you want to manipulate images, edit audio, or animate stories, there's a free and open source tool to do the trick. 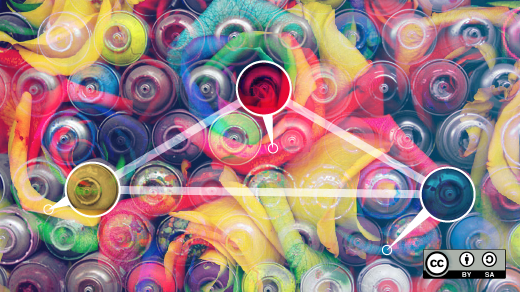 A few years ago, I gave a lightning talk at Red Hat Summit that took attendees on a tour of the 2012 open source creative tools landscape. Open source tools have evolved a lot in the past few years, so let's take a tour of 2016 landscape.

If you'd like to follow new developments more closely, and perhaps even help out by testing the latest development versions of the first four of these applications—GIMP, Inkscape, Scribus, and MyPaint—you can install them easily on Linux using Flatpak. Nightly builds of each of these applications are available via Flatpak by following the instructions for Nightly Graphics Apps. One thing to note: If you'd like to install brushes or other extensions to each Flatpak version of the app, the directory to drop the extensions in will be under the directory corresponding to the application inside the ~/.var/app directory.

GIMP celebrated its 20th anniversary in 2015, making it one of the oldest open source creative applications out there. GIMP is a solid program for photo manipulation, basic graphic creation, and illustration. You can start using GIMP by trying simple tasks, such as cropping and resizing images, and over time work into a deep set of functionality. Available for Linux, Mac OS X, and Windows, GIMP is cross-platform and can open and export to a wide breadth of file formats, including those popularized by its proprietary analogue, Photoshop. 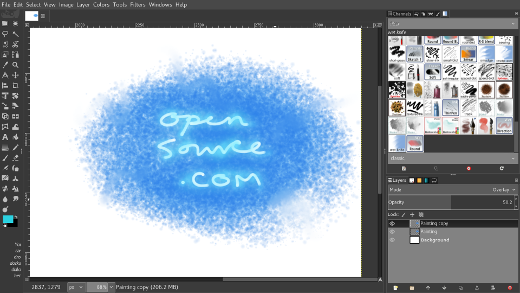 Inkscape is a richly featured vector-based graphic design workhorse. Use it to create simple graphics, diagrams, layouts, or icon art.

The latest stable version is 0.91; similarly to GIMP, more excitement can be found in a pre-release version, 0.92pre3, which was released November 2016. The premiere feature of the latest pre-release is the gradient mesh feature (demonstrated in screenshot below); new features introduce in the 0.91 release include power stroke for fully configurable calligraphic strokes (the "open" in "opensource.com" in the screenshot below uses powerstroke), the on-canvas measure tool, and the new symbols dialog (shown in the right side of the screenshot below). (Many symbol libraries for Inkscape are available on GitHub; Xaviju's inkscape-open-symbols set is fantastic.) A new feature available in development/nightly builds is the Objects dialog that catalogs all objects in a document and provides tools to manage them. 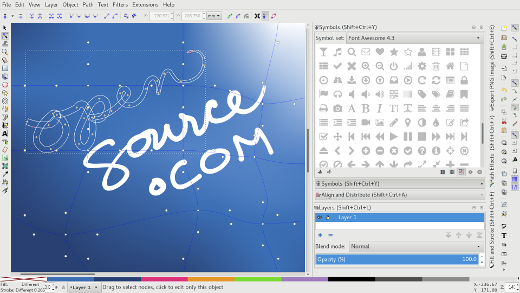 Scribus is a powerful desktop publishing and page layout tool. Scribus enables you to create sophisticated and beautiful items, including newsletters, books, and magazines, as well as other print pieces. Scribus has color management tools that can handle and output CMYK and spot colors for files that are ready for reliable reproduction at print shops.

1.4.6 is the latest stable release of Scribus; the 1.5.x series of releases is the most exciting as they serve as a preview to the upcoming 1.6.0 release. Version 1.5.3 features a Krita file (*.KRA) file import tool; other developments in the 1.5.x series include the Table tool, text frame welding, footnotes, additional PDF formats for export, improved dictionary support, dockable palettes, a symbols tool, and expanded file format support. 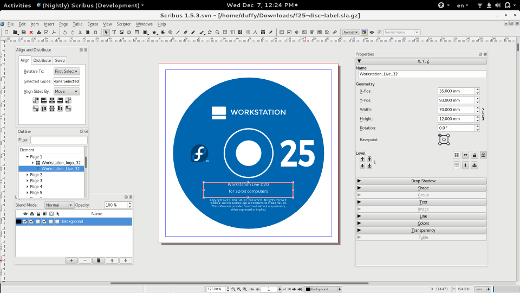 MyPaint is a drawing tablet-centric expressive drawing and illustration tool. It's lightweight and has a minimal interface with a rich set of keyboard shortcuts so that you can focus on your drawing without having to drop your pen.

MyPaint 1.2.0 is the latest stable release and includes new features, such as the intuitive inking tool for tracing over pencil drawings, new flood fill tool, layer groups, brush and color history panel, user interface revamp including a dark theme and small symbolic icons, and editable vector layers. To try out the latest developments in MyPaint, I recommend installing the nightly Flatpak build, although there have not been significant feature additions since the 1.2.0 release. 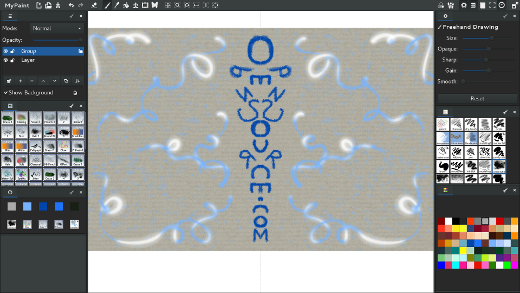 The latest stable Blender release is 2.78a. The 2.78 release was a large one and includes features such as the revamped Grease Pencil 2D animation tool; VR rendering support for spherical stereo images; and a new drawing tool for freehand curves. 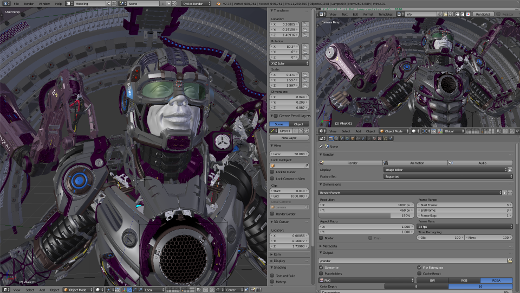 To try out the latest exciting Blender developments, you have many options, including:

Krita is a digital drawing application with a deep set of capabilities. The application is geared toward illustrators, concept artists, and comic artists and is fully loaded with extras, such as brushes, palettes, patterns, and templates. 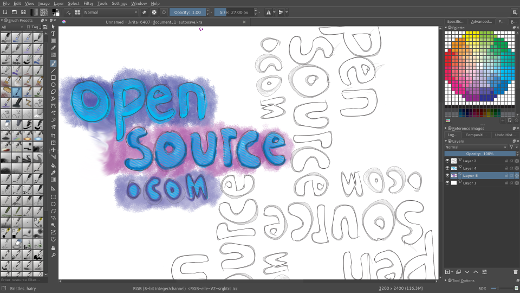 There are many, many options for open source video editing tools. Of the members of the pack, Flowblade is a newcomer and Kdenlive is the established, newbie-friendly, and most fully featured contender. The main criteria that may help you eliminate some of this array of options is supported platforms—some of these only support Linux. These all have active upstreams and the latest stable versions of each have been released recently, within weeks of each other.

Kdenlive, which was initially released back in 2002, is a powerful non-linear video editor available for Linux and OS X (although the OS X version is out-of-date). Kdenlive has a user-friendly drag-and-drop-based user interface that accommodates beginners, and with the depth experts need.

Learn how to use Kdenlive with an multi-part Kdenlive tutorial series by Seth Kenlon.

Released in 2012, Flowblade, a Linux-only video editor, is a relative newcomer.

Pitivi is a user-friendly free and open source video editor. Pitivi is written in Python (the "Pi" in Pitivi), uses the GStreamer multimedia framework, and has an active community.

Shotcut is a free, open source, cross-platform video editor that started back in 2004 and was later rewritten by current lead developer Dan Dennedy.

SwatchBooker is a handy utility, and although it hasn't been updated in a few years, it's still useful. SwatchBooker helps users legally obtain color swatches from various manufacturers in a format that you can use with other free and open source tools, including Scribus.

GNOME Color Manager is the built-in color management system for the GNOME desktop environment, the default desktop for a bunch of Linux distros. The tool allows you to create profiles for your display devices using a colorimeter, and also allows you to load/managed ICC color profiles for those devices.

The GNOME Wacom controls allow you to configure your Wacom tablet in the GNOME desktop environment; you can modify various options for interacting with the tablet, including customizing the sensitivity of the tablet and which monitors the tablet maps to.

Xournal is a humble but solid app that allows you to hand write/doodle notes using a tablet. Xournal is a useful tool for signing or otherwise annotating PDF documents.

SparkleShare is a git-backed file-sharing tool artists use to collaborate and share assets. Hook it up to a GitLab repo and you've got a nice open source infrastructure for asset management. The SparkleShare front end nullifies the inscrutability of git by providing a dropbox-like interface on top of it.

Darktable is an application that allows you to develop digital RAW files and has a rich set of tools for the workflow management and non-destructive editing of photographic images. Darktable includes support for an extensive range of popular cameras and lenses. 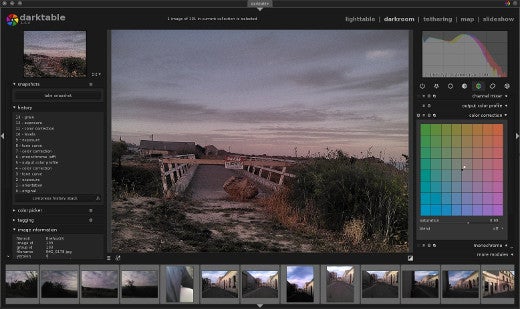 Entangle allows you to tether your digital camera to your computer and enables you to control your camera completely from the computer.

Hugin is a tool that allows you to stitch together photos in order to create panoramic photos.

Synfig Studio is a vector-based 2D animation suite that also supports bitmap artwork and is tablet-friendly.

I covered Blender above, but particularly notable from a recent release is a refactored grease pencil feature, which adds the ability to create 2D animations.

Ardour is a digital audio workstation with an interface centered around a record, edit, and mix workflow. It's a little more complicated than Audacity to use but allows for automation and is generally more sophisticated. (Available for Linux, Mac OS X, and Windows.)

Hydrogen is an open source drum machine with an intuitive interface. It provides the ability to create and arrange various patterns using synthesized instruments.

Mixxx is a four-deck DJ suite that allows you to DJ and mix songs together with powerful controls, including beat looping, time stretching, and pitch bending, as well as live broadcast your mixes and interface with DJ hardware controllers.

MuseScore is a music score creation, notation, and editing tool with a community of musical score contributors.

MakeHuman is a 3D graphical tool for creating photorealistic models of humanoid forms.

FontForge is a typeface creation and editing tool. It allows you to edit letter forms in a typeface as well as generate fonts for using those typeface designs.

Valentina is an application for drafting sewing patterns.

There are a lot of toys and goodies to try out there. Need some inspiration to start your exploration? These websites and conference are chock-full of tutorials and beautiful creative works to inspire you get you going: 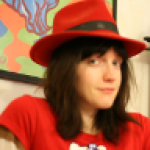 Máirín is a senior principal interaction designer at Red Hat. She is passionate about software freedom and free & open source tools, particularly in the creative domain: her favorite application is Inkscape (http://inkscape.org).
More about me